There are officially 26 sublevels of the Centre. However, Jarod had calculated excavation data to reveal a secret 27th sublevel. With 27 sublevels of the Centre, there is an absolutely enormous amount of space. SL-27 was the playground for Mr Raines and his most nefarious projects and experiments. It is largely unknown what goes on in most of the sublevelsm and probably never will be revealed. Here we expose what we have discovered

Look, I don’t know if you guys missed it, but, uh, the only people who know about this SL 27 thing are either dead or comatose.

A fire in the summer of 1982 is now believed to be what caused the shut down of SL-27, and most probably what was responsible for Raine’s dependency on the oxygen tank. There was also evidence of another Sim Lab in SL-27, of which Sydney was unaware. It is most likely where Raines ran other Pretender Projects including Kyle. Just digging up some more dirt on the Centre

Jarod discovered the existence of the secret sub level by calculating excavation volumes of dirt. The Tech Room
Heart of the tech operations of the Centre

East wing infirmary where Miss Parker had a Tonsillectomy Men’s Room where Broots was terrorised by Mr Cox 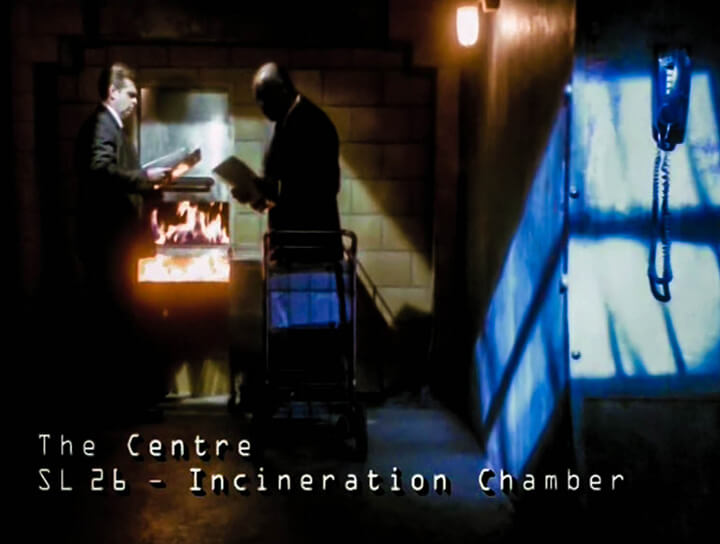 Incinerator where Leonard was murdered Aftermath from the bomb Sydney planted Sub Level 27 was a secret sub level that used to be Raines’ secret ‘playground’. Prodigy seemed to be run from there and it is most likely where the secret Pretender Project Kyle was maintained, after Kyle was officially ‘released’ from Centre custody.

It included an ‘Inception’ room 155 and birthing rooms as well, although the birthing beds came with shackles.

The existence of this level was revealed by Jarod in Baby Love, first alluded to by Jacob scrawling SL-27 on a piece of scrap paper in Under the Reds after he came temporarily out of a coma.Miss Parker and Sydney had no idea what SL-27 even meant, but found clues independently of Jarod, including the bracelet of one of the former projects, Dara, who was rescued by Catherine

It was destroyed by a fire, but still holds many of the Centre’s most sinister secrets/Sydney planted a bomb in Bloodlines  in an effort to destroy it. It survived however to later reveal more of its twisted secrets.