Chairman of the Centre

The Parker family has run the Centre for generations, and Mr Parker assumed the Chair sometime before 1963, which is when Jarod was taken. He has since run the Centre with iron control until he went missing over the Atlantic in 2001, after jumping out of  a plane with the Scrolls.

Mr Parker ‘s first loyalty is to the Centre and the pursuit of power, and then family. He is not above using family in that pursuit of power and he has clung to controlling the Centre with a single minded purpose and ruthlessness.

Married to Catherine, he put the needs of the Centre above those of his wife, and raised his daughter, Miss Parker, to be as calculating as he was. After the supposed death of her mother, he told his daughter simply that life goes on and that seemed to be the extent of his mourning.

Despite being dedicated to his work, he and Catherine adopted a young girl, Faith, who was dying and brought her to the Centre in search of a cure. Given Mr Parker’s lack of any familial feelings, it seems most likely that this was done to appease his wife, who was determined to do right by the children of the Centre.

Mr Parker has exhibited a certain level of ruthlessness, but unlike Mr Raines, seems to take no real pleasure in petty cruelty. He knows how to play the politics and wield power efficiently, doing what needs to be done, at any cost. Running afoul of the Triumvirate on a few occasions, including after the failure to capture Jarod and his mother in Chicago, Mr Parker is crafty enough to know when to lay low and return triumphantly.

One of Mr Parker’s most powerful tools when it comes to his daughter, is emotional manipulation. Miss Parker’s need for his approval and affection allows him to control her and use her to further his own ambitions.  Secrets and lies have kept her from knowing the most ugly truths about the Centre and her family’s Legacy. He keeps her prisoner there just as surely he did with Jarod, only using chains of love and loyalty.

A family is a tyranny ruled over by its weakest member. 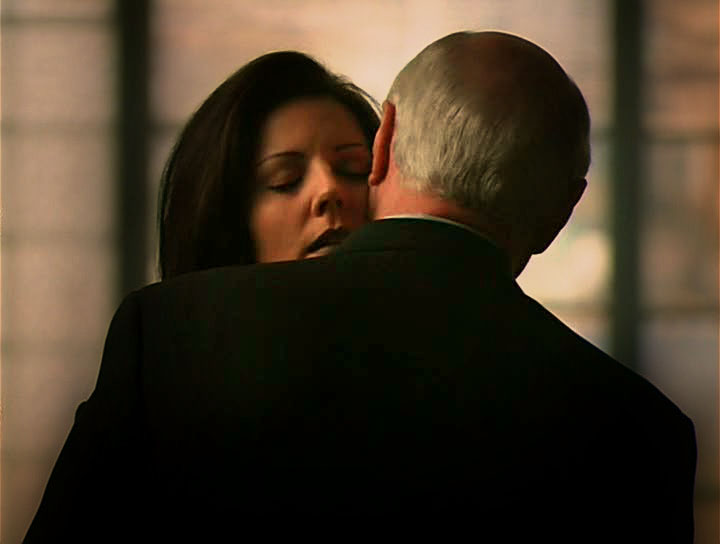 One of Mr Parker’s most powerful tools when it comes to his daughter, is emotional manipulation. Miss Parker’s need for his approval and affection allows him to control her and use her to further his own ambitions.  Secrets and lies have kept her from knowing the most ugly truths about the Centre and her family’s Legacy. He keeps her prisoner there just as surely he did with Jarod, only using chains of love and loyalty.

A family is a tyranny ruled over by its weakest member. 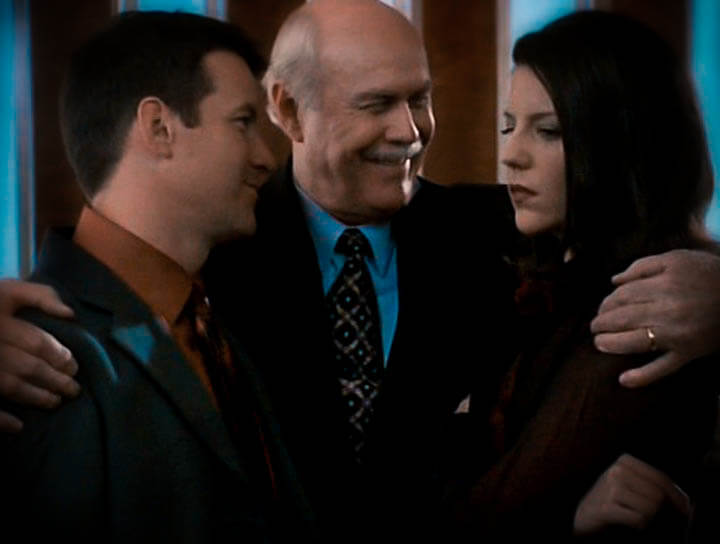 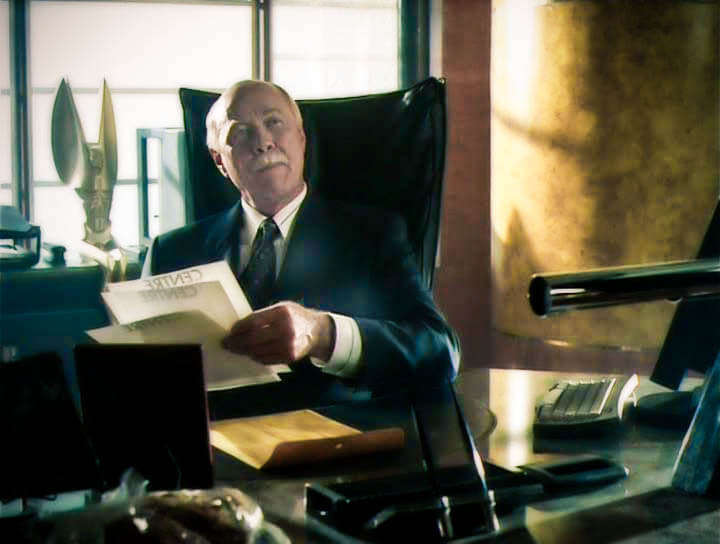 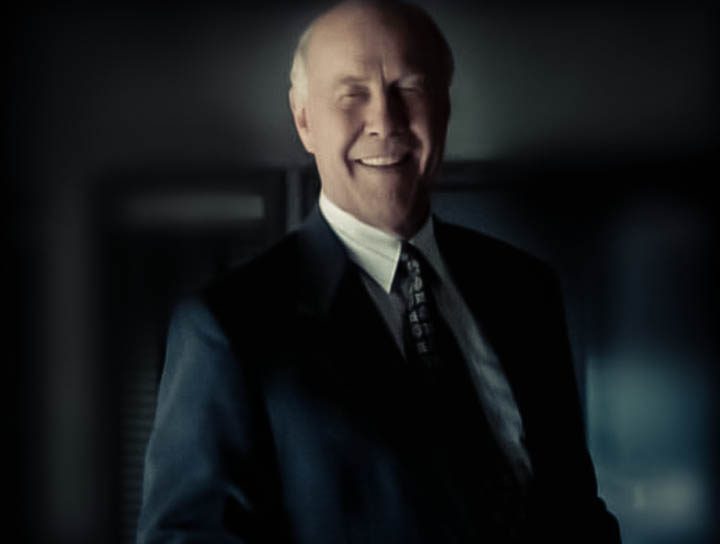 Little is known about Mr Parker, professionally or personally. He married Catherine and they seemed to be in love, although the marriage had trust issues and he became distant to her and secretive. They had two children together, twins, Miss Parker and Mr Lyle, although Catherine was told Lyle was stillborn. It is unclear if Mr Parker knew that this was a lie, and offered up his son to Mr Raines for their long term agenda. Mr Parker claims he had no idea, but his credibility is quite thin, given all the lies and secret agendas he has been a part of.

After Catherine died, he raised his daughter the same way he ran the Centre, with a cold and ruthless efficiency. He groomed her to be the heir to his legacy. Mr Parker remained single after the death of his wife for many years, until the late 90’s, when he met Brigitte, whom he later married, against the vehement opposition from his daughter. A few years prior, Mr Parker had survived an assassination attempt, foiled by Miss Parker, and the assassin was Brigitte.

Disappearing for a short time, without any explanation, he returned to run the Centre, taking over from Mr Lyle who was in temporary charge. With promises to his daughter that she could leave if she caught Jarod, it was back to business as usual.

Under pressure from the Triumvirate, Mr Parker called a T-board and subjected his daughter to interrogation, with the possibility of re-education. Upon being confronted by this betrayal, he claimed he did it to protect her. It is not clear whether this is true or not.

Mr Parker kept a great many secrets from his daughter, and when it was revealed that Mr Lyle was actually her twin, that she had never known about, even Miss Parker started to doubt her father. The more she dug, the more it appeared that he was actually sanctioning many of Mr Raines’ secret projects, or at the very least turning a blind eye.

Once it was out in the open that Mr Lyle was his son, he took him into many confidences that he excluded his ‘Angel’ from, more and more she was on the outside and Lyle was clearly the favourite. 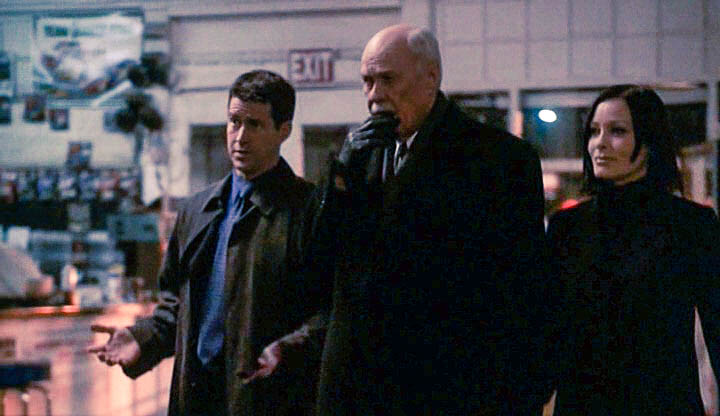 When Miss Parker fell in love with Thomas Gates, Mr Parker was extremely upset about this and offered Tommy money to leave. When Miss Parker informed her father that she was leaving for Oregon, Thomas was murdered. There was never any definitive proof that it was Mr Parker that ordered the execution, carried out by Brigitte, it was later revealed, but it is most likely it was done on his order. At the very least he was part of the cover up.

When Jarod found out about the Gemini project, and stole his clone, with the help of his father, Major Charles, the Centre captured Major Charles. Jarod then kidnapped Mr Parker to exchange for his own father. Mr Parker actually admired Jarod for his courage and gutsy move, understanding how the game was played. Mr Raines took advantage of all the turmoil and in a bold move to take control of the Centre for himself, ordered the execution of Mr Parker. Willie, however, missed and shot Miss Parker instead, but although they lost both Major Charles and the Clone, they did manage to capture Jarod.

The Triumvirate, displeased with the entire Parker clan, took Mr Raines and Mr Parker for ‘re-education’ and left Mr Lyle in charge once again. Mr Parker returned not long after, and it is not clear whether he escaped or was released. He went into hiding with his now pregnant wife and was working towards regaining his position as Chairman, while hiding from the PTB’s. The child was believed to be his new future, the continuation of the Parker Legacy, and exactly what this meant for Miss Parker and Mr Lyle was never revealed. The child was born, and he seemed absolutely unconcered whether it was a boy or girl, or that his ‘beloved’ wife had died in the childbirth. Taking the child, he returned triumphantly to the Centre.

After it is revealed that Mr Raines murdered Catherine after giving birth to another son, Ethan, Jarod’s half brother, Mr Parker imprisons him in a sublevel cell and just before he can reveal the secrets to Miss Parker, Mr Parker shoots Raines.

I love you as my daughter. That’s all that counts. 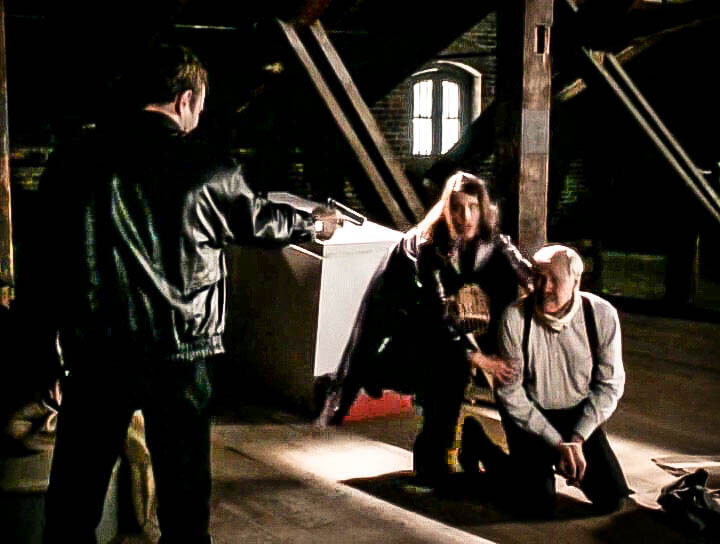 Mr Parker is kidnapped again in 2001, by Alex, a pretender that failed to escape with Jarod, as part of an elaborate revenge plot. Alex reveals to Miss Parker that Mr Parker is not actually her father and that her real father knows all the secrets. When Jarod arrives to take down Alex, Mr Parker sustains a blow to the head, resulting in a coma, after telling Miss Parker that there is so much she needs to know.

While in a coma, with no indication of ever coming out of it, Jarod and Miss Parker find out that their mother’s were working together and go on the hunt for the Scrolls, which supposedly have all the secrets they both want so badly.

What neither of them realise, is that Mr Parker is now miraculously out of his coma and monitoring their pursuit, having mended fences with the not-so-dead Mr Raines. They are using Jarod to find the hidden scrolls, which is what will allow them to take the power back from the Triumvirate.

With both the scrolls and Jarod now in their possession, Mr Parker is finally able to consolidate his position and his Legacy forever. Returning to Blue Cove with his prizes, he kills the Triumvirate escorts and plans to parachute out of the plane with Raines, Lyle, Jarod and the scrolls. Miss Parker being present is an unexpected problem.

Jarod encourages Mr Parker to read the scrolls and whatever he finds their is enough to shatter everything he believes in. Whatever it was that Catherine was trying to do, he now believes she was right. Virtually admitting to his daughter that he wasn’t really her father, which also leads to questions about the Parker baby, he jumps out of the plane with the Scrolls, leaving everyone to die. with a Pretender on board though, Jarod manages to safely land the plane, although is then blamed from the murder of the Triumvirate members and the loss of the scrolls.

It is believed that Mr Parker died in this jump, taking the scrolls back to the sea with him. Nothing is certain though, as nobody ever really dies at the Centre.

Don’t be sad. The new Parker legacy begins with you. God be with you, Angel.