Grief was something Sydney had long understood.  It was something he’d thought he’d long gotten over.  But as he finally laid eyes on his destination he wasn’t so sure.
Shaded from the moonlight by the branches of a towering old-growth buckeye, was a simple, aged, two-person vestibule mausoleum. Sydney slowly approached the structure noticing the tendrils of ivy growing on its sides, tendrils that appeared to be pulling it down into the earth.  In that moment, Sydney too felt a pull – from within.  He wasn’t sure what it forewarned, but it tugged at a place in his soul that caused him great trepidation.
Gathering his courage, Sydney flashed his torch on two words carved in the ashlar stones highlighting the frame above the bronze door.
It was an inscription in Latin he’d noticed the first time he’d been there. Sydney could only imagine the irony in Jarod’s heart when The Pretender read them for himself on his visit here.
filii inlacrimat.

Discover what Syndey finds that will change Jarod’s path forever in the first Pretender Novel, Rebirth – coming this fall.

Tell your friends to follow the link http://eepurl.com/Cc-J5  so they too can be officially on the Centre Insiders List. 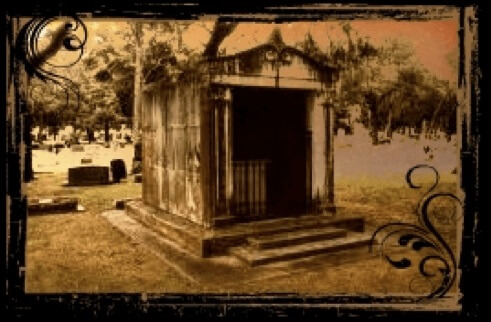