The sickly five-year-old girl is named Dara, in the official database she’s known as #003478, but in the working corridors of The Centre people refer to her as the tricycle girl. With her straight black hair and hollow eyes the crueler observers comment that she looks like the orphaned child from a Salem witch.
They should be careful with their unkind thoughts because Dara certainly possesses unusual gifts that should make one wonder.
Hyper-intuitive is Sydney’s catch phrase for her and he should know – he’s seen how the touch of her tiny fingers to an object or a person has produced amazing insights through her connection – insights that have brought everything from sheer joy to darkening dread to Dara’s expression.
Her visionary acumen has come in quite handy at times and is as equally embraced by Sydney as it is shunned by Miss Parker. Maybe because there’s no hiding secrets from Dara?
Take note – if you’re ever walking in the corridors of The Centre and a girl on her trike rolls by, be mindful of your thoughts.
Dara may be smiling on the outside, but inside, rest assured that her old soul is taking mental notes of your ultimate truth faster than her three little wheels can spin her past you in a blur.
You saw a glimpse of her once long ago – you will learn all about her soon in the first Pretender Novel – Rebirth.
Share this with your friends – and tell them if they want to receive the CI Newsletter just follow the link and they will be officially on the Centre Insiders List – the CI’s get all tP secrets first. 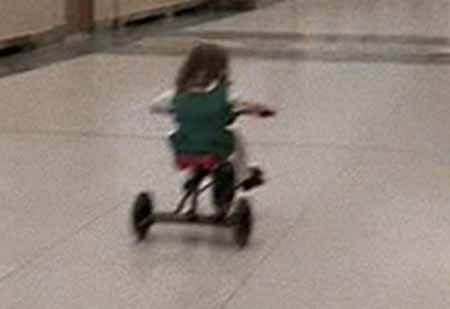